Watch One Week Of ALL Of Playboy TV Online FREE!

A South African inventor unveiled a new anti-rape female condom that hooks onto an attacker's penis and aims to cut one of the highest rates of sexual assault in the world. "Nothing has ever been done to help a woman so that she does not get raped and I thought it was high time", Sonette Ehlers, 57, said of the "rapex", a device worn like a tampon that has sparked controversy in a country used to daily reports of violent crime.

Police statistics show more than 50,000 rapes are reported every year, while experts say the real figure could be four times that as they say most rapes of acquaintances or children are never reported.

Ehlers said the "rapex" hooks onto the rapist's skin, allowing the victim time to escape and helping to identify perpetrators.

"He will obviously be too pre-occupied at this stage," she told reporters in Kleinmond, a small holiday village about 100km (60 miles) east of Cape Town. "I promise you he is going to be too sore. He will go straight to hospital".

The device, made of latex and held firm by shafts of sharp barbs, can only be removed from the man through surgery which will alert hospital staff, and ultimately, the police, she said. It also reduces the chances of a woman falling pregnant or contracting AIDS and other sexually transmitted diseases from the attacker by acting in the same way as a female condom.

Ehlers, who showed off her prototype, said women had tried it for comfort and it had been tested on a plastic male model but not yet on a live man. Production is planned to start next year. 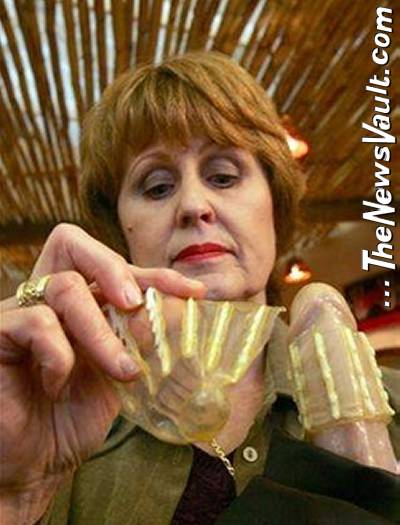 Nude Babe Of The Day!

Enjoy the vault? Link to us!